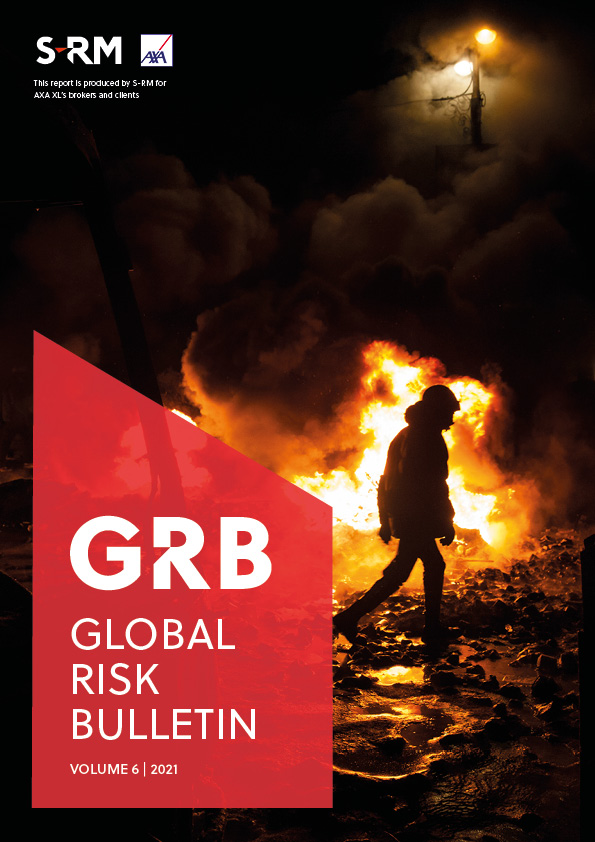 With no clear solutions to the Houthi conflict, a political stalemate in Aden and a worsening humanitarian crisis, the increasingly fragmented security environment in Yemen presents new and renewed threats to citizens, neighbouring Saudi Arabia and the commercial maritime sector alike, writes Gabrielle Reid.

In September, grievances over the persistent humanitarian crisis and deteriorating living conditions in Yemen sparked the largest protests reported in a single week in the country since 2015. The protests prompted the Southern Transitional Council (STC) to declare a state of emergency across the south of the country, including in the port city of Aden. With a worsening humanitarian crisis and rising food prices – compounded by a falling Rial – and the now protracted war in the west of the country, Yemenis have grown increasingly disillusioned with both the government of President Abdrabbuh Mansur Hadi and its fragile alliance member, the STC. As the emergency in the south intensifies, Houthi forces have continued to make territorial gains in the west of the country, including securing control over the Ain, Bayhan, and Usaylan districts in the Shabwah governorate in the final weeks of September. The worsening crisis in Yemen, while devastating for local nationals, brings with it renewed threats to neighbouring Saudi Arabia and the strategic Bab al-Mandab Strait.

Yemen is entering its seventh year of civil war, and at least 20.7 million citizens – 71 percent of the population – are in need of humanitarian assistance of some form. In September, World Food Programme (WFP) chief David Beasley warned that 16 million people are at risk of starvation, as food rations in the country are set to be cut from October due to inadequate funding. Now, with the Rial all but collapsing, even city-based citizens are in crisis. Over September, thousands of citizens gathered in the streets to denounce the government and other stakeholders’ failure to address Yemen’s near socio-economic collapse. Largescale demonstrations were reported in Aden, Al Mukalla, Ataq, Ash Shihr, Ghayl Ba Wazir and Ta'iiz, with at least three people killed in ensuing altercations with security forces. In response to the unrest, the STC – which entered a shaky power sharing agreement with the Hadi government in 2019 – declared a state of emergency in the Aden, Shabwah, Hadrawmat and Lahij governorates. Yet, despite the associated restrictions on gatherings, localised protests have continued amid no clear or immediate solutions to Yemen’s economic woes.

Meanwhile, the worsening tensions in the south could prompt renewed clashes between rival militias. Although the Hadi administration and STC entered into a fragile peace deal in November 2019, there remains significant animosity between the two parties and their respective supporters. Already, in the wake of the recent protests, clashes between an unidentified armed group and the STCbacked Security Belt Forces were reported in Aden’s central Crater district where the government headquarters and the central bank are housed. Though calm was restored, the clashes demonstrate the fragility of the security situation in the temporary capital. Tensions between pro-Hadi and pro-STC forces have spiralled into open conflict in the past, and these tensions and the potential for renewed fighting in the south remain a pertinent threat to efforts aimed at addressing the humanitarian crisis. And, with their opponents so divided, the Houthis in the west have little incentive to pursue a negotiated solution, meaning war is likely to remain a prominent characteristic of Yemen’s operating environment. 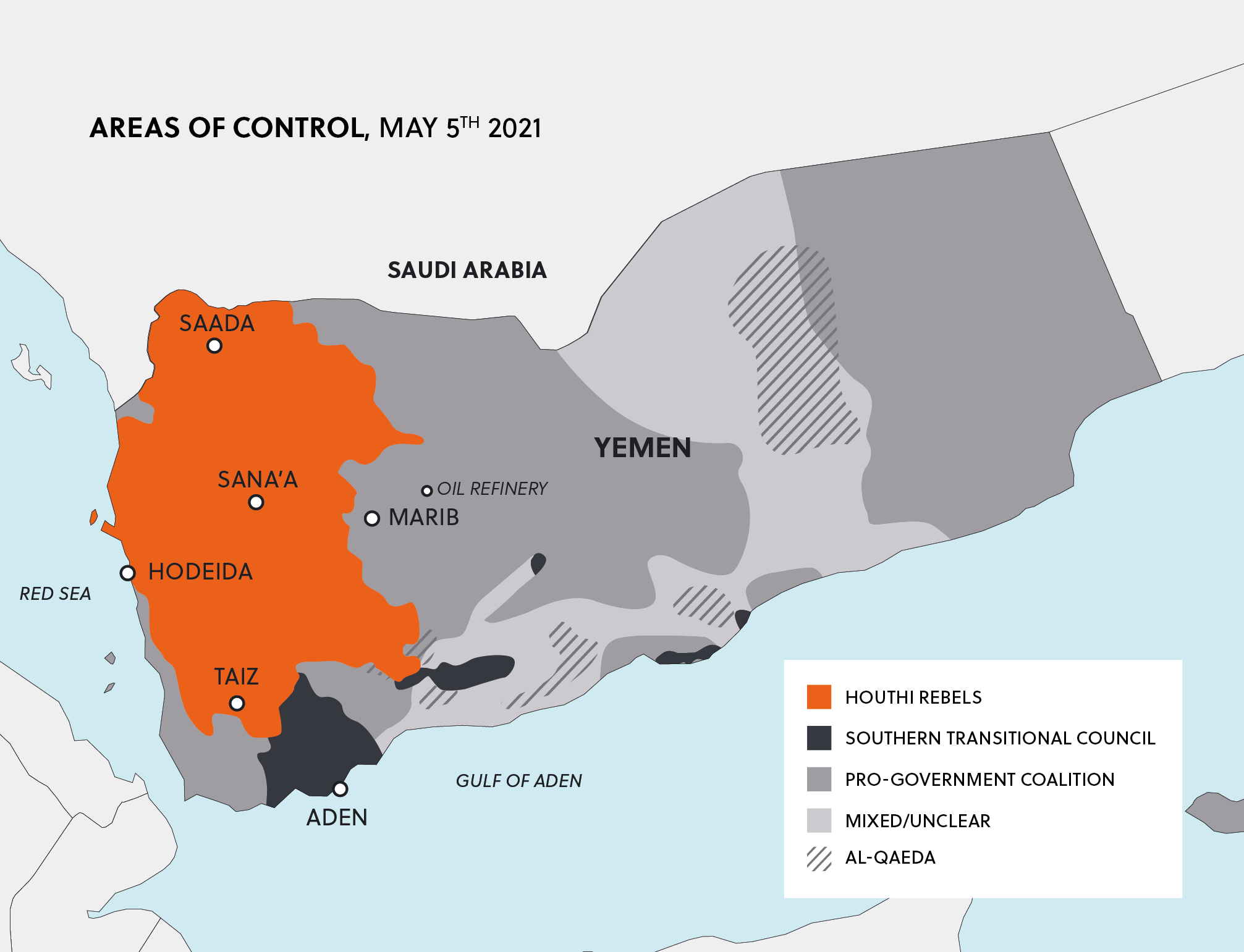 THE HOUTHI ADVANCE AND REGIONAL REPERCUSSIONS

As the crisis in the south unfolds, the Houthi forces have advanced their campaign against the Yemeni military as well as the Saudi Arabia-led Coalition forces in western Yemen. In recent weeks, the group has successfully advanced on key districts in the Shabwah governorate and continued assaults against government forces in Marib. From their new territory in Shabwah, the Houthis have also expanded into the Harib district (Marib), encircling Yemeni and Coalition forces in what appears to be preparation for a decisive battle. Along with the Hadramawt Valley, Marib and Shabwah account for most of Yemen’s oil and gas production and offer the Houthis a strategic advantage in any forthcoming negotiations. Accordingly, a battle for these important regions is now all but inevitable in the latest phase of this protracted war. Meanwhile, bolstering their territorial control has also meant that Houthis have been able to increase their drone and missile attacks, including into Saudi territory.

"From their new territory in Shabwah, the Houthis have also expanded into the Harib district (Marib), encircling Yemeni and Coalition forces in what appears to be preparation for a decisive battle"

There has been a recent uptick in drone attacks into the Kingdom, including an attack on 31 August against Abha International Airport that injured eight people and damaged a commercial aircraft. While the Saudis have been able to successfully intercept most strikes, an emboldened Houthi campaign could attract the support of ally Iran once more, and present an opportunity for a more coordinated attack remnant of the 2019 strikes against Abqaiq and Khurais oil facilities in the near future. And, a strengthened Houthi campaign onshore also means the Houthi maritime threat in the Bab Al-Mandab Strait and the Red Sea is real and rising. The Houthis are well practiced in the use of water-borne improvised explosive devices and the deployment of naval mines, with at least 50 successful and attempted attacks against vessels and port facilities reported since 2017. These attacks have engaged both military and commercial vessels off the Hodeidah coast. While the Houthis are unlikely to risk escalating their attacks to include regular and indiscriminate attacks against the commercial maritime sector, a single, and well-timed attack could prove increasingly attractive for the group while the use of sea mines presents the persistent threat of collateral damage to vessels transiting the strait.

As the situation in Yemen becomes increasingly complex and characterised by various crises on multiple fronts, securing a viable solution for peace will become more challenging if not near impossible. International stakeholders are calling for adversaries to prioritise the needs of the Yemeni people and focus on providing and securing solutions to the humanitarian situation. Yet, with a lack of consensus among domestic stakeholders on how this will be achieved, and the potential for even these good intentions to become politicised for future leverage, Yemen appears to be stuck in a perpetual cycle of crisis for the coming months at least.