Source of Wealth Risks in Venezuela 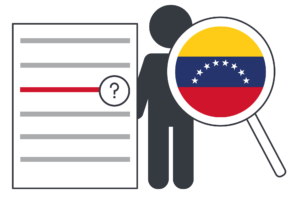 Money laundering, bribery and fraud are pervasive in Venezuela, with the country ranking 168 out of 180 countries in Transparency International’s corruption perceptions index. Since 2008, the country’s political landscape has been dominated by the United Socialist Party of Venezuela (‘PSUV’), whose leading members have gradually established dominance over all government institutions in the country, including the judiciary. Corruption is also tolerated as a means to control the military, other political parties, and the business sector.

The relationship between businessmen and corrupt officials in Venezuela is so prevalent that it has impacted the local lexicon. The term bolichicos (or boliburguesía, bolibourgeoisie) is used to refer to a group of businessmen who have profited from illegal dealings with the government. These bolichicos are widely known to the public and are commonly the subject of controversy stemming from recurrent allegations that they abused their proximity to political power to gain preferential treatment in contracts with the Venezuelan state. They are also known to make extensive use of foreign-incorporated companies and accounts in jurisdictions deemed tax havens to move corrupt funds outside of Venezuela.

Corruption risks pervade all industries with substantial government oversight in Venezuela, but particular scrutiny should be applied to the source of wealth of individuals who been involved in the Venezuelan oil and gas sector, foreign exchange, and food industries.

Venezuelan public officials have historically solicited bribes to award contracts with Petróleos de Venezuela SA (‘PDVSA’), the state-owned oil and gas company, and bid rigging has become endemic in the industry. Venezuelan oil and gas exploration is the main legal source of funds to the government, previously accounting for nearly 95 percent of the country’s export revenue. The siphoning off of this revenue through corrupt activities is believed to have led to a multi-billion-dollar loss for PDVSA. In January 2019, the United States government announced economic sanctions on PDVSA with a view to curtailing financing to the Maduro government. Essentially, the sanctions bar all transactions between US entities and the Venezuelan oil and gas industry. It is likely that this will have a substantially negative impact on the PDVSA’s revenue going forward as the US used to be the destination for 30 to 40 percent of the PDVSA’s total exports.

Foreign exchange is a highly regulated market in Venezuela with artificially set exchange rates due to runaway inflation and currency devaluation. The Venezuelan state’s role in granting access to foreign currency has led to systemic corruption in the foreign exchange market via the solicitation of bribes, kickbacks, and the use of frontmen and shell companies. The state-controlled market has also enabled capital flight for corrupt officials and businessmen taking their profits abroad. This has led to difficulties accessing foreign currency and the development a parallel currency black-market in the country.

High inflation in Venezuela has led the government to centralise the production and distribution of food, and the food sector has become dependent on import contracts that are susceptible to corruption. Food import contracts have been known to have artificially inflated prices, with government officials and businessmen embezzling margins of the contract price. While corruption happens at all levels of the food distribution chain, various Venezuelan state-owned companies have been central to facilitating this corruption.