Political Violence in Asia Pacific: The Destabilising Impact of COVID-19

The COVID-19 pandemic and related restrictions are having a devastating effect on economies and public health across the Asia Pacific region, exacerbating existing political and socio-economic grievances and creating new ones.

As governments perform the difficult balancing act of containing the spread of the virus while restarting commercial activities, threats of social unrest and political upheaval are on the rise. Some countries have managed to lower infection rates substantially and are gradually reopening their economies, but still face a potential second wave of infections, while the worst is yet to come for others. This requires companies operating in the region to not only factor health and economic risks into their decision-making, but also take into account complex political and security dynamics.

While each country faces a unique set of circumstances, the relationship between the pandemic and political stability depends on several key factors, including:

Several countries have managed to flatten the infection curve and started to reopen their economies, including China, Hong Kong, South Korea, Taiwan, Australia and New Zealand. The public health success of East Asia, however, contrasts with many countries in South-East and South Asia. In South-East Asia, cases have been rising exponentially since mid-March. Several studies indicate that tens of thousands more infections may be undetected due to the low testing rate in Indonesia and the Philippines alone, which have a combined population of more than 370 million people. Experts also question low infection figures in Cambodia, Laos, and Myanmar among other countries, criticising inadequate testing and lack of government transparency. In South Asia – home to more than 1.8 billion people – the outbreak does not appear as severe as initially expected. Again, low testing rates or the countries being in the early stages of their outbreaks may account for relatively low confirmed case numbers.

Regardless of a country’s success or failure to tackle the virus to this point, the threat of a second wave of infections persists. For example, in March-April, Singapore went from being commended globally for its COVID-19 response to experiencing thousands of new cases. Singapore did not initially test many migrant labourers, who reside in overcrowded dormitories and are now the main carriers of the virus in the city-state. On 12 May, the authorities decided to test all 324,000 migrant workers.

The pandemic has the potential to escalate the threat of civil unrest, adding further volatility to an already fragile commercial operating environment. Even before the COVID-19 outbreak, there were anti-government protests in Hong Kong; demonstrations against the Citizenship Amendment Act (CAA) in India; and a political crisis that resulted in the collapse of Malaysia’s ruling coalition. For now, government-imposed restrictions on large gatherings and travel have brought a degree of calm across the region. While there have been protests, strikes, clashes, vandalism or looting in places such as Afghanistan, Bangladesh, Cambodia, Hong Kong, India, Indonesia, the Philippines and Thailand, most incidents have been isolated and quickly dispersed by security forces. But as restrictions are eased amid worsening socio-economic conditions, unrest is likely to resurface. Most governments in the region lack the ability to protect jobs or create new ones, or to distribute relief indefinitely. To make matters worse, officials have been accused of stealing relief resources in several countries. Post-pandemic economic recovery efforts are likely to be slow and uneven, potentially exacerbating existing social disparities.

In Hong Kong, there has already been an increase in protests in April and May. The Chinese government’s hostile rhetoric towards protesters has intensified, while Hong Kong authorities have arrested several high-profile anti-government activists. Without addressing the underlying discontent, their approach to the protest movement will likely prompt more protests and violence.

In the Philippines, the government has been accused of allowing Chinese online gaming firms to resume operations ahead of other local businesses, which could reignite anti-Chinese sentiment and protests. Rising anti-Chinese sentiment is not unique to the Philippines, as other countries have also criticised Chinese authorities’ initial handling of the pandemic and aggressive moves in the South China Sea in recent weeks. In addition to government interests, protesters across the region are increasingly targeting commercial entities over layoffs, unpaid wages, and other grievances.

Furthermore, with regional governments focused on fighting the pandemic, peace efforts and security operations in conflict hotspots will likely decline. This could embolden terrorist, militant and separatist groups. There has been considerable armed violence in India-controlled Jammu and Kashmir, southern Philippines, western Myanmar and across Iraq and Afghanistan throughout April and May. Under the prevailing circumstances, armed groups may be taking advantage of security forces being overburdened and outstretched. 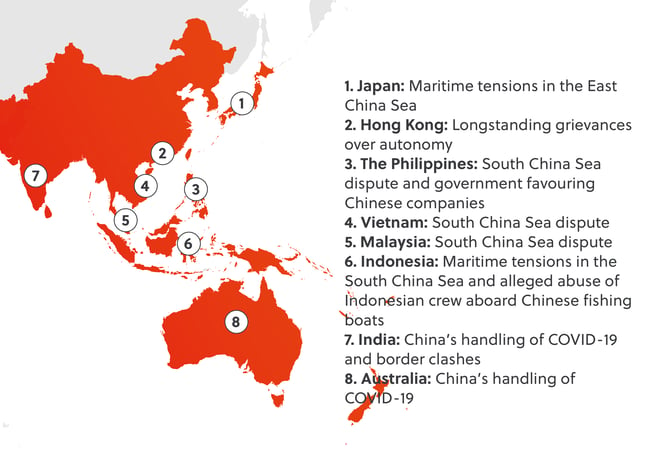 Governments shore up their powers

To enforce COVID-19 restrictions, many governments in the region have taken measures to shore up their powers, which they have then used to stifle dissent and clamp down on protesters. For example, the Chinese government has formed a task force of law enforcement officials to “defend political security” and “resolve conflicts related to the coronavirus outbreak.” In Cambodia, policymakers passed a State of Emergency law that critics fear is mainly aimed at suppressing political opposition, rather than fighting COVID-19. In the Philippines, the parliament granted President Rodrigo Duterte emergency powers to tackle the pandemic, a move commentators claim would exacerbate his authoritarian streak.

In several countries, security forces have used force against COVID-19 lockdown violators and protesters. Parliamentary and electoral activities have also been suspended or postponed barring a few exceptions. And as already noted, Hong Kong authorities are increasingly clamping down on protesters. Activists across the region are concerned that the authorities’ use of emergency powers will set a dangerous precedent that will extend beyond the pandemic. This will pose a significant barrier to democratic politics, including legitimate anti-government activities.

Rising political and socio-economic grievances on the one hand, and governments’ increased powers to enforce the law on the other, have the potential to threaten political stability. In most cases, incumbent administrations will likely thwart any political challenges to their rule. They will use a combination of force and reassurance – that they are best placed and most experienced to overcome the ongoing crisis – to stay in power. Political rivals and other stakeholders may also set aside their differences to work together during this period. However, this is not guaranteed, as governments mishandling a major public health and economic crisis could also cause people to mobilise in large numbers. At the very least, sporadic instances of protests, clashes and looting will continue over the coming weeks and months. 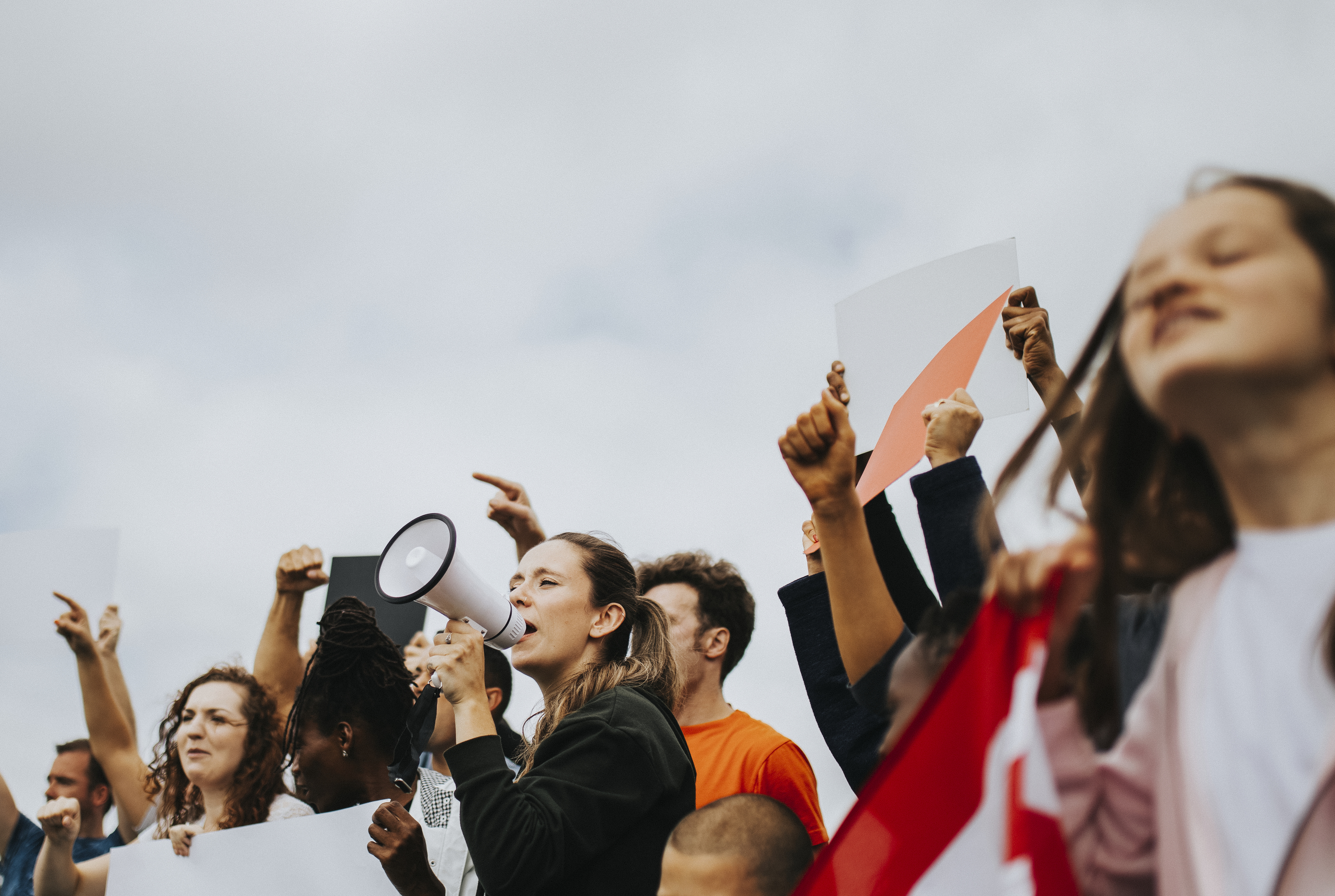 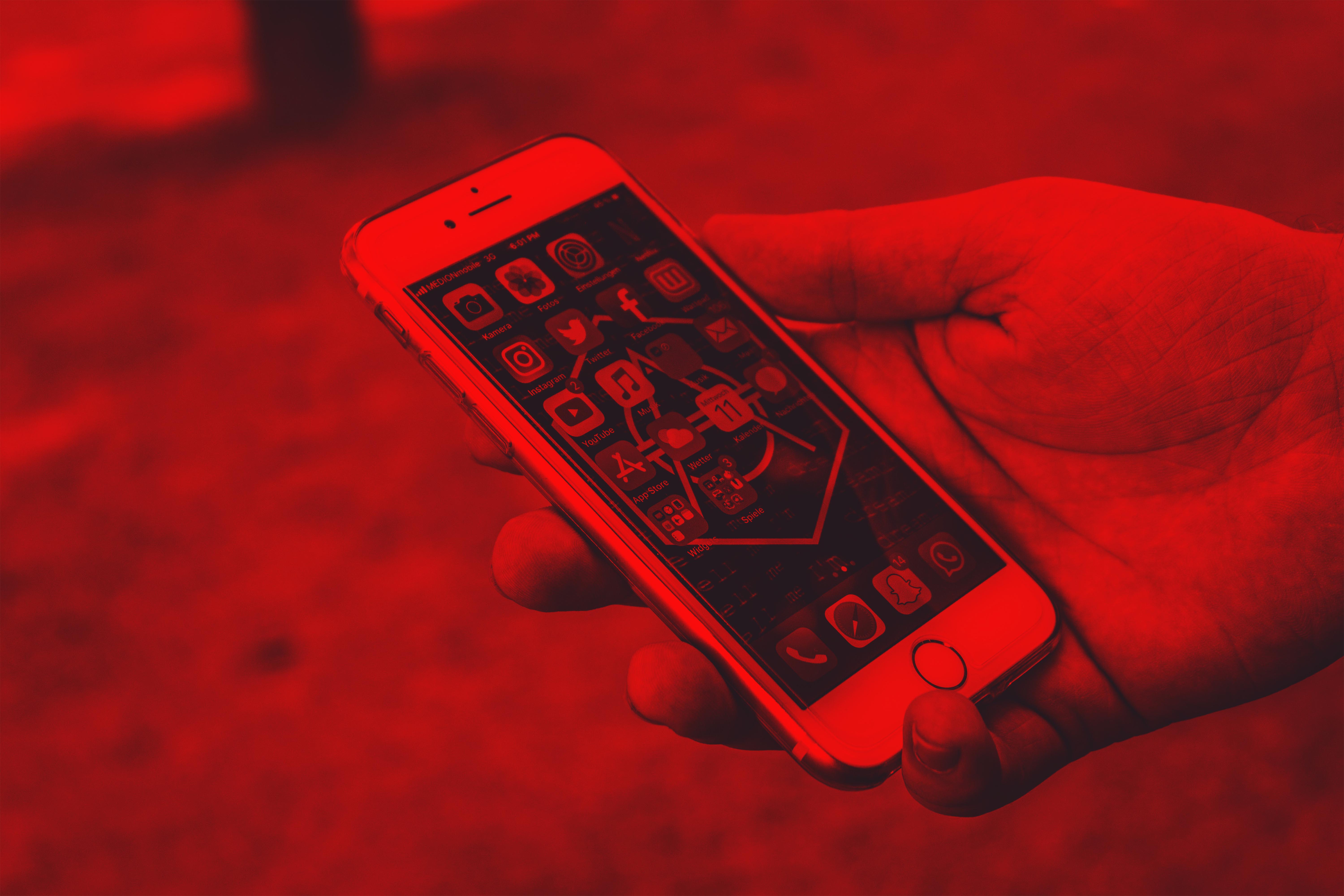