This investment has driven the development of businesses as diverse as payment and issuer processing, mobile payments, insuretech, blockchain, and peer-to-peer lending. DFIs and impact investors are drawn to the fintech sector for the opportunities it offers to improve financial inclusion levels. As Udayan Goyal, Managing Partner of Apis Partners, which recently closed a USD 550 million fund focused on fintech in Asia and Africa, points out, “there is an undisputed correlation between financial inclusion and GDP growth,” making a clear impact case for investment in the sector. Stewart Langdon, Partner at LeapFrog Investments, which manages a USD 700 million impact fund, agrees, adding that 90 percent of the population in many emerging markets do not have access to the financial services they need. In the wake ofbehavioural changes resulting from the COVID-19 pandemic, demand for fintech solutions globally is only expected to increase.

At S-RM, our regional specialists in Asia, Africa, and Latin America have seen a corresponding increase in integrity due diligence requests in the sector. Regulatory environments can present a key risk to fintech investors in emerging markets, and we are often also asked to provide insight on anticipated regulatory changes. Below, we provide a comparative overview of regulatory environments in Asia, Africa, and Latin America, before reflecting on common challenges faced by investors, and assessing how COVID-19 may have altered the picture. Our insight is sourced from S-RM’s regional network in addition to EMPEA investment data and interviews with several leading investors in the space.

In 2018 and 2019, the emerging Asian fintech sector received nearly USD 20 billion across almost 300 private equity-led investments. Asia is a global leader in fintech adoption and boasts some of the world’s most advanced fintech markets, led by China, India, South Korea, and Singapore. This is due in part to high levels of government support. Regulators across much of the region are taking a flexible, “light touch” approach aimed at encouraging growth and innovation. “Asian regulators are broadly more progressive—they are cautious, but they try not to put obstructive regulations in place,” says Goyal of Apis Partners.

The prominent exception to this trend has been China, where investment in fintech has dropped significantly since 2018, as the country has grappled with the effects of the US-China trade war and attempted to rein in its massive shadow banking sector. In the pursuit of financial stability, cryptocurrencies and peer-to-peer lending have been hit hard by regulations. A ban on Initial Coin Offerings introduced in 2017 remains in place, and last year the central bank launched a series of shutdowns and new restrictions on Bitcoin traders. A similar crackdown took place in the crowdfunding sector following a series of high-profile scandals. Despite the turbulence caused by these interventions, however, investment in fintech-based payments and asset management solutions has continued unabated and the effect is likely to be stabilising in the long run. The government has introduced positive measures to encourage foreign participation in fintech and more extensive use of blockchain technologies.

Elsewhere in the region, India and Singapore stand out as two of the most attractive markets. Singapore’s regulatory system is viewed as best-in-class, a result of the fact that developing fintech is central to its Smart Nation initiative. It was the first country in the region to set up a regulatory sandbox, and has recently introduced the Sandbox Express to expedite approval processes and attract more participants. India’s regulations for the non-banking financial services sector are also reasonably progressive, but its key current attraction is its digital infrastructure, notes Goyal. Two state-led innovations in particular are notable in this respect: Aadhaar–a central biometric ID system–which enables KYC issues to be resolved through a central database, and UPI–a real-time inter-bank mobile payment system–which allows people to transfer money without entering card or bank account details. Despite presenting a boon for financial inclusion, Aadhaar in particular has raised concerns over data protection. The Supreme Court has so far facilitated its use, but this position may be altered depending on the future shape of India’s data protection legislative framework, which is currently under review.

While Singapore and India are leading the way, and other major markets such as Indonesia and Thailand are rapidly catching up, some shortfalls continue to exist in the region outside China. Regulators in countries such as Bangladesh continue to require wet-ink signatures as part of the financial transaction process, which constitute a core impediment to developing digital payments infrastructure. In Vietnam and Myanmar, legal frameworks around crowdfunding are underdeveloped. This has led to a proliferation of scammers in the Vietnamese peer-to-peer lending industry, deterring investors and threatening the reputation of legitimate actors. 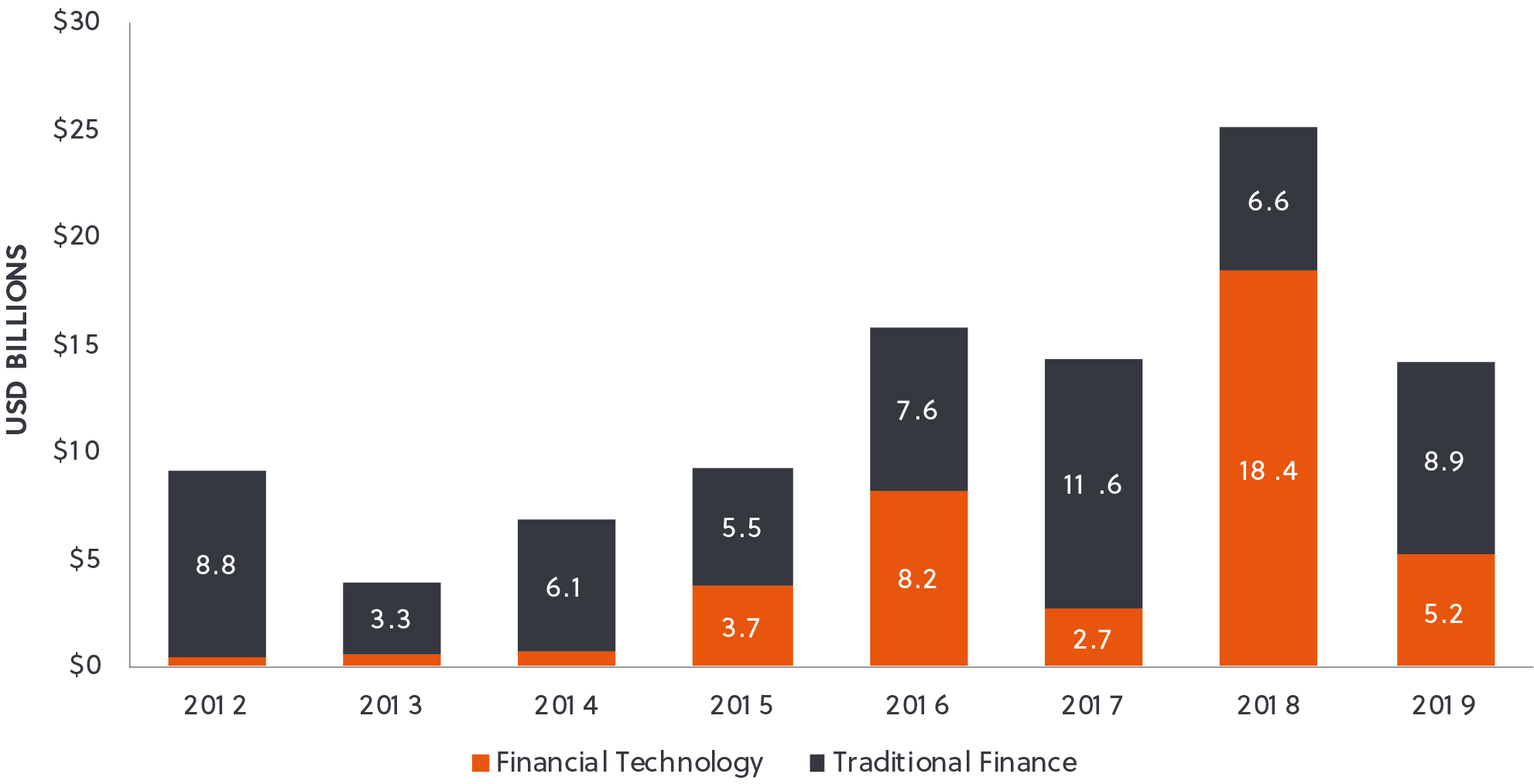 FINTECH & FINANCIALS INVESTMENT in emerging markets globally, 2012-2019 (NO. OF DEALS)

Africa is the world’s leading adopter of mobile money, with payment processing and digital lending emerging as high-growth sectors too. Given its lower GDP relative to Asia, the continent attracts a predictably smaller sum of fintech investment, with USD 400 million split across 35 private equity-led transactions between 2018 and 2019. While African central banks are generally supportive of fintech’s ability to extend financial inclusion to their heavily under-banked populations, regulatory volatility has been a headline risk for investors in the region. With over half the continent’s jurisdictions yet to implement data protection regulations and uncertainty over interest rate caps hanging over many others, this threat is set to persevere.

Despite Nigeria’s vibrant start-up scene, pressure from the country’s politically influential traditional banking sector has helped delay the adoption of forward-looking regulations. This prohibited the onset of mobile money in Africa’s largest economy for over a decade, and has turned investors off potential disruptors to banks. Headwinds have been lighter for those fintech companies which complement rather than threaten Nigeria’s traditional banks, with payment processors Interswitch and Opay emerging as market leaders, and now sighting expansion across the continent.

Eastern African regulators have gained a reputation for being forward-looking in nurturing the mobile money sector since the late 2000s, enabling the emergence of market leader M-Pesa which now processes a transaction volume equivalent to 40 percent of Kenya’s GDP. Concerns continue to exist, however, regarding future regulatory interventions in the sub-region. The exit of California-headquartered mobile lender Tala from Tanzania last year occurred following threats of interest rate caps imposed on lenders by the country’s regulator. In Kenya, draft legislation introduced in 2019 threatens to place mobile lenders under central bank supervision, following the bank governor’s public criticism of their allegedly usurious behaviour. While impact investors generally welcome the curbing of predatory lending practices, populist targeting of fintech solutions and the accompanying potential for capricious regulatory change presents a concern. 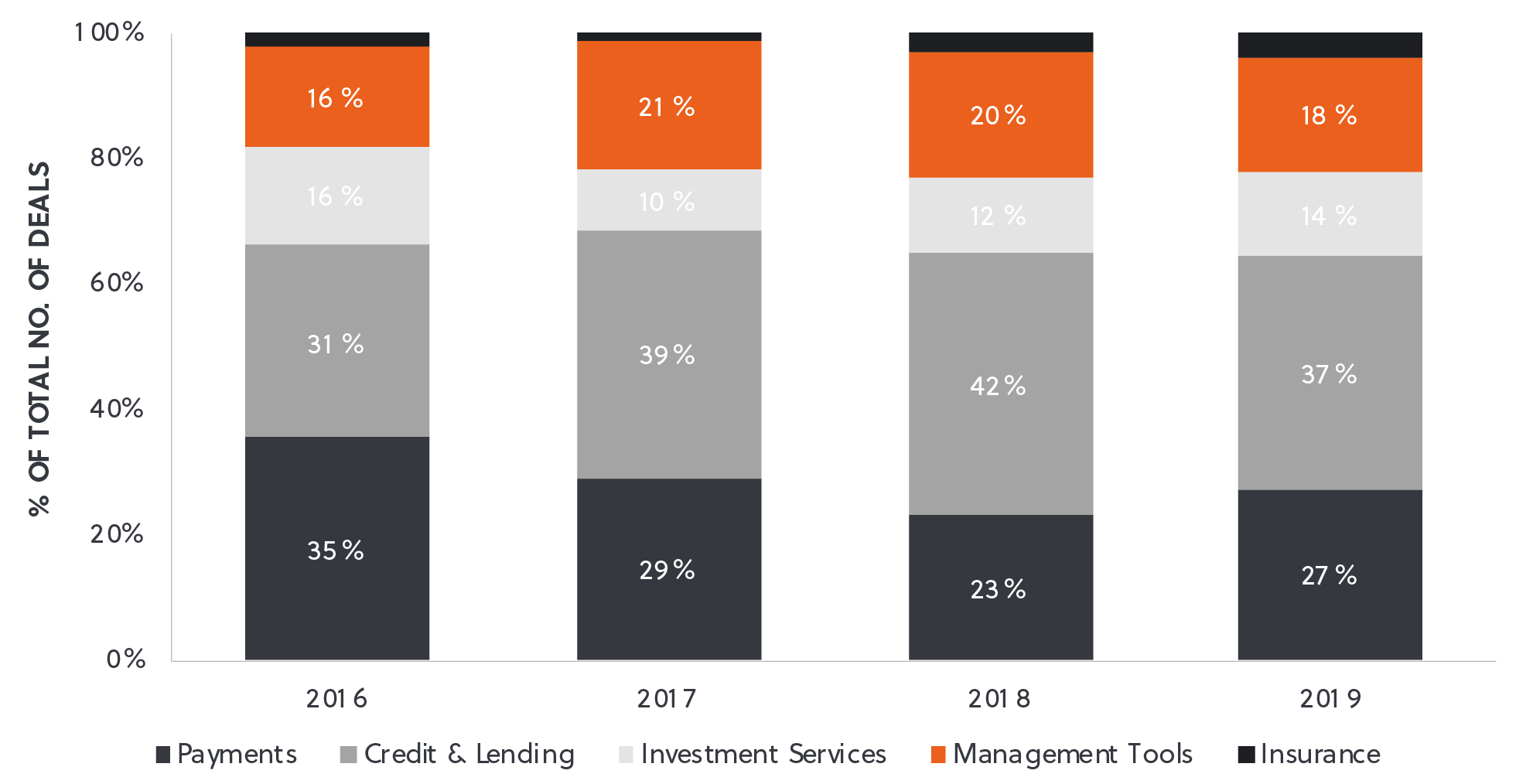 Latin American fintech has recently attracted record levels of private equity-led investment, with USD 2.7 billion split across almost 100 transactions between 2018 and 2019. Brazil has been the single largest recipient, with Mexico and Colombia also strongly represented.

This inflow has been enabled by recent regulatory reform. Christian Lesmes of Kandeo Fund, a Latin America-focused financial services investor, has been broadly impressed with fintech regulations across the six markets he has had significant exposure to. He is especially encouraged by Mexico’s adoption, and Brazil’s proposed adoption, of Open Banking, which enables the sharing of account details to fintech providers. Lesmes also points to Colombia as providing a leading example of a high-quality regulatory sandbox, enabling operators to experiment without fear of undue retribution. Stewart Langdon of LeapFrog Investments described the efforts made by Brazil as exemplary, praising in particular its smooth licencing processes, its early adoption of data analytics for credit scoring, and its ability to create a level playing field between fintech players and the country’s five traditional banks.

The region is not without operational hurdles, however. In Mexico, the success in developing the first fintech regulatory framework in Latin America is understood to have resulted in a glut of licence applications from new start-ups, which overwhelmed the system, leading to approval delays. A high-profile dispute between telecommunications and anti-trust regulators over the sale of e-commerce start-up Cornershop to Uber has delayed the proposed investment substantially, and, will constitute cause for concern for fintech operators who rely on smoothly regulated ancillary sectors such as e-commerce. The regulatory dynamic of traditional lenders lobbying against fintech insurgents is apparent in the region too. In February 2020, the Argentinian banking sector lobbied the central bank to approve a resolution prohibiting the direct debit of loans originating from non-banking entities, and in May, the Argentinian government decided not to transfer pensions to digital accounts, a move that had been proposed by local fintech companies due to the impact of COVID-19.

Brazil was the single largest recipient of private equity-led investment for fintech ventures between 2018 and 2019.

According to LeapFrog’s Langdon, there are five key characteristics of a welcoming fintech regulator: certainty around data regulation, openness towards digital signatures, prioritisation of digital payments, a rapid licencing process, and, finally, open-mindedness to innovation. This provides a compelling framework for analysing regulators, and despite the existence of several exemplary regulatory regimes discussed above, many others do not yet satisfy all of the considerations.


The onset of the COVID-19 pandemic has added a sixth test—the agility of regulators in the face of unparalleled demand for many fintech services. Despite the resistance of Argentinian regulators cited above, other markets are seeing more promising signs.

Government responses to the crisis in Brazil and Singapore contain explicit provisions supporting the fintech sector. The Indian Reserve Bank has urged citizens to switch from cash to digital payments, and Kenyan regulators have encouraged the mobile money transaction cap to be removed on M-Pesa.

But the growing adoption of fintech during the pandemic brings with it additional threats. With increased digitisation comes increased cyber security risk. Equally, digital lenders and insuretech operators have typically targeted customers who are under-served by more risk-averse competitors. As the economic challenges grow, many such customers are defaulting, leaving start-ups exposed and capital adequacy ratios under threat. Investors will be watching regulators’ responses carefully: pragmatic reactions which eschew draconian fines will likely see their tolerance ultimately rewarded in the form of renewed investor commitment.