Attack of the Drones: The Regional Implications of the Abqaiq-Khurais Strikes

An attack on the world’s biggest crude processing facility in Saudi Arabia has fuelled growing tensions in the Middle East. With Saudi and US fingers pointing to Iran as the culprit, the escalation of hostilities has become increasingly likely. S-RM presents an outlook for security developments in the region.

On 14 September, the Abqaiq and Khurais oil facilities in Saudi Arabia’s Eastern Province were attacked. Seven cruise missiles and 18 suspected Iranian delta-wing unmanned aerial vehicles were used to target the two facilities, which are located more than 180 km apart. The incident caused significant damage to the facilities, halting nearly half of Saudi Arabia’s oil production. The Yemen-based Houthi movement, which is backed by Iran, has since claimed responsibility for the attack.

“With Iran being held directly culpable for the attack, ongoing geopolitical tensions in the Middle East will become further strained.”

Top US officials, including President Donald Trump, have alleged that Iran is directly responsible. While Houthi drone and missile attacks on Saudi Arabia are common, on 17 September US defence officials claimed that the attack was launched from Iran. On the same day, Saudi Arabia said preliminary findings show Iranian weapons were used in the attack. The Saudi Defence Ministry held a news conference on 18 September to present findings from a military investigation into the incident, and said the attack was “unquestionably sponsored by Iran”. Saudi officials also determined that based on the direction of the attack, it “did not originate from Yemen”. Specific details of the launch points were not yet available. With Iran being held directly culpable for the attack, ongoing geopolitical tensions in the Middle East will become further strained. 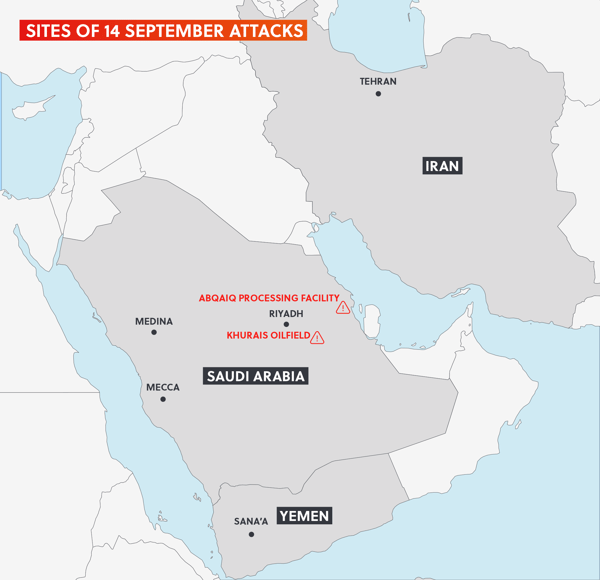 WHO CARRIED OUT THE 14 SEPTEMBER ABQAIQ AND KHURAIS ATTACK?

Iran’s involvement in the attack would be the latest in a series of recent incidents demonstrating the pressure brought on by extensive US economic sanctions is failing to make the latter capitulate; in fact, Iran and its proxies have chosen to respond with more belligerence. Regardless of the evidence Saudi Arabia has presented, Iran is unlikely to acknowledge responsibility.

Since 2015 the Houthis, a Yemen-based rebel movement, have carried out numerous drone and missile strikes on Saudi Arabia. Such attacks have intensified since May 2019. Although Saudi Arabia claims to have intercepted most of these drones and missiles, the Houthis have successfully targeted Riyadh and strategic Saudi infrastructure on multiple occasions, including oil facilities and airports. For example, in mid-May, the Houthis carried out a drone attack on two oil pumping stations in Riyadh Province, and in mid-June, a missile attack on Abha International Airport in Asir Province injured more than 26 people.

UN investigators believe the Houthis have recently acquired more powerful drones that could reach up to 1,500 km and there have been unconfirmed reports of drone attacks by Houthis on civilian airports in Abu Dhabi and Dubai. However, the scale and precision of the 14 September attack have significantly exceeded all previous Houthi operations in Saudi Arabia.

WHERE TO FROM HERE? TEMPERED AGGRESSION IN THE US AND IRAN, SAUDIS HESITANT

The latest attack will likely prompt a significant escalation in regional tensions, and there is substantial uncertainty over how these tensions will develop in the coming days. Following the Saudi investigation’s conclusion that Iran is directly responsible leaves the US and Saudi Arabia with a difficult choice – whether or not to confront Iran militarily.

In the immediate aftermath of the attack, President Trump implied that a military response is possible if Iran is found to be directly responsible for the strike. The president has since tempered his rhetoric, stating that the US “would certainly like to avoid” war. Trump has used this Janus-faced approach several times over the past year – threatening Iran militarily but also stressing that the US does not want to initiate an armed conflict. His indecision was most overtly displayed in June, when he gave initial approval for airstrikes in retaliation for Iran shooting down a US drone, before calling off the strikes with the aircraft in mid-flight.

While Trump has proved to be an unpredictable decision-maker on US foreign policy, he will be hesitant to embroil the US in a war with Iran, especially ahead of 2020 US presidential elections. Direct US intervention would risk a major military escalation in the region, which would contradict his 2016 campaign promises to reduce US military involvement in the Middle East and Afghanistan. Particularly with the recent dismissal of National Security Advisor and foreign policy hawk John Bolton, Trump’s hesitance will likely win out over US officials who want a war with Iran. Hard-line Iranian officials will face similar pushback from moderates, who recognise that Iran cannot afford to engage in a conventional military conflict with the US.

Yet, the 14 September attack has diminished the prospects of US-Iran talks in the short term. Iran’s Supreme Leader Ali Khamenei – the country’s most influential figure – remains opposed to any talks or concessions to the US. As a result, even if Trump has the intent to secure talks with Iran, the available means through which he will achieve this are unclear given an increasingly defiant Iran.

President Trump has indicated that upon the conclusion of the investigation, he will be guided by Saudi Arabia as to how those responsible will be confronted. Saudi Arabia also appears hesitant to engage in a war with Iran. It is already embroiled in a major conflict in Yemen. Another war with Iran could prove costly, especially at a time when Saudi Arabia is trying to attract more foreign direct investment.

The Saudi Arabian leadership, however, may feel the need to take a stronger stance now that their investigation has found that Iran was directly involved in the attack. Saudi authorities will carefully consider whether their response will be confined to efforts to deter further attacks of this nature, or involve direct military engagement with Iran.

The attack against the Saudi oil facilities was the latest in a series of incidents since May 2019 that have exacerbated Middle East tensions, which are likely to remain high over the coming months. More attacks similar to the 14 September incident could eventually prompt the US to carry out strikes inside Iran. However, this move will likely be undertaken as a last resort. Significant uncertainty notwithstanding, S-RM assesses that all three major players – the US, Iran and Saudi Arabia – remain cautious over initiating an all-out war.

Instead, the US will likely continue to impose economic and political pressure on Iran. Trump posted a tweet on 18 September indicating the US will “substantially increase sanctions”. Saudi Arabia, meanwhile, will intensify its aerial bombardment campaign in Yemen and bolster air defence capabilities at home. Israel, while not technically a Saudi ally, will likely carry out more airstrikes on Iranian proxies in Syria and Iraq, with clandestine support from the US.

Iran, on the other hand, will respond to more pressure with increased defiance, banking on its calculation that the US and Saudi Arabia want to avoid a major conflict. It will instead persist in encouraging the Houthis to stage more drone and missile attacks on Saudi Arabia. It will also continue to flex military muscle in the Strait of Hormuz, including through the harassment of merchant vessels seen between May and July 2019. The country could also urge its proxies to target US interests in Iraq and Lebanon. Iran will hope that these actions eventually force the US to rethink its strategy and grant the Islamic Republic more leverage in any future talks.

While an imminent outbreak of war is unlikely, any miscalculation on the part of the key actors could prompt a further escalation in tensions. The situation remains fluid and susceptible to rapid deterioration. We continue to monitor developments closely.